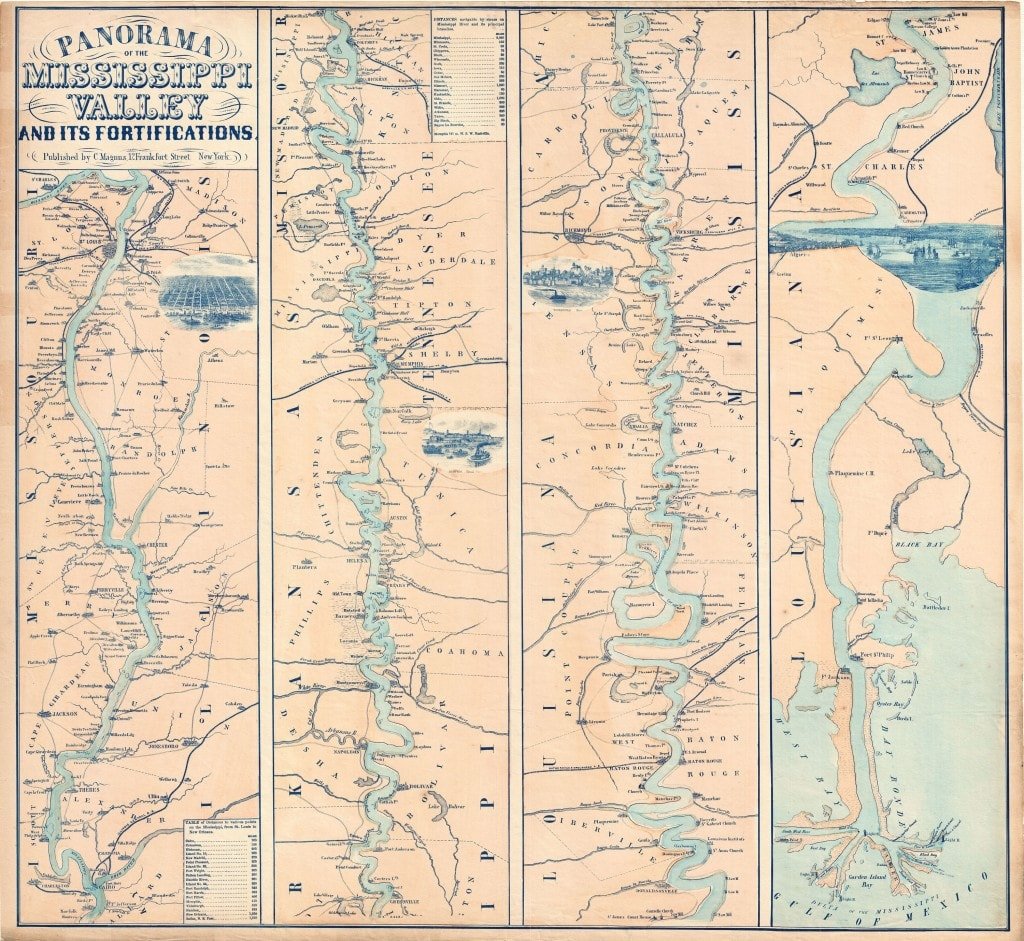 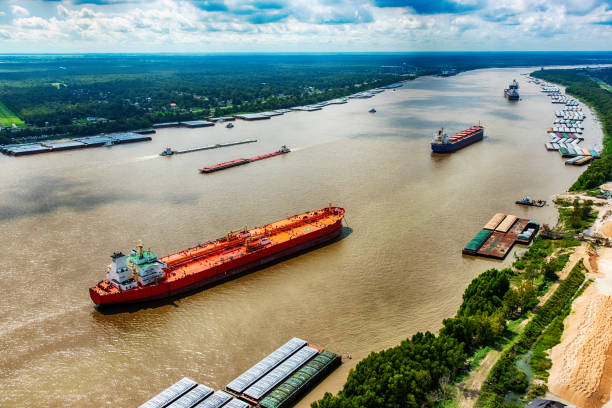 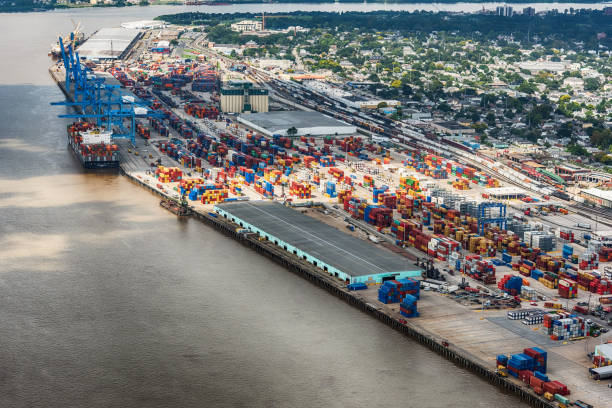 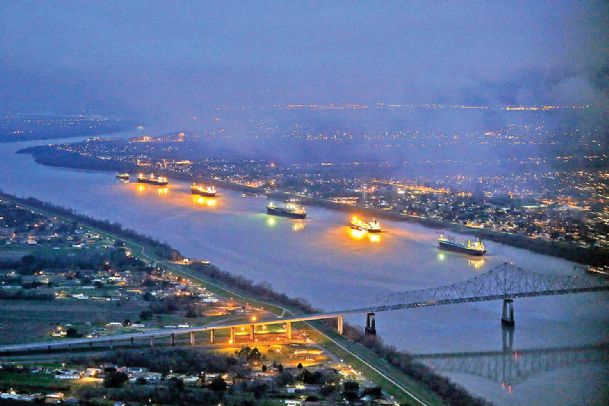 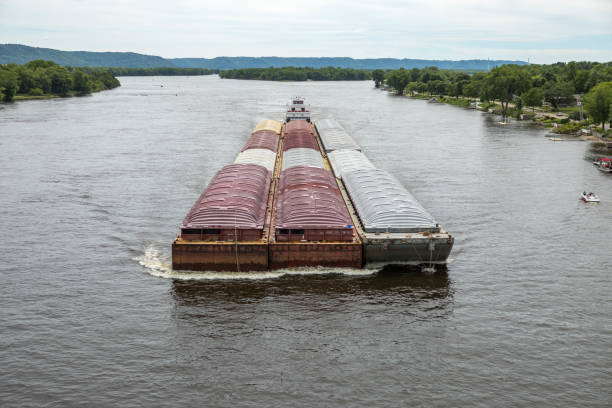 Crescent Pilots:
Recommended loading draft for their area of the river is 48 feet.

NOBRA Pilots
Recommended loading draft is as follows: 48 feet from New Orleans to Mile 150 (NOBRA is not taking orders for vessels wishing to anchor in Grandview Anchorage with a draft of 48 feet due to lack of adequate survey data); 47 feet from Mile 150 to Mile 180 ; 45 feet from Mile 180 to Mile 234.  Vessels with a draft of 40 feet or greater area required to transit the Baton Rouge Harbor during daylight hours only.

The NOBRA Pilots’ Board of Examiners is in the process of reviewing its Standards of Care relative to High Interest Vessels and over the coming months hope to revise this specific standard that will allow for a clearer determination for the application of the standard.  Presently, operationally, the Board of Examiners is NOT designating a vessel as a High Interest Vessel when the Captain of the Port Order is an Order requiring a Crew Control Security Plan (“CCSP”) in which the sole purpose of the CCSP is to prohibit vessel crew members from disembarking the vessel.  During this transitional process, the Standards of Care remain as drafted and do provide the Board of Examiners authority to designate a vessel as HIV.

Federal Pilots:
Draft recommendation for the Mississippi River is 45 feet.

As conditions can change, you should always check with the pilots prior to loading

Lower Mississippi River to be Deepened to 50 Feet

The ports at Baton Rouge, New Orleans, South Louisiana, St. Bernard and Plaquemines are slated to have deep draft access after Louisiana Gov. John Bel Edwards and other state officials signed a formal agreement with the U.S. Army Corps of Engineers Friday to begin construction on the deepening of the Lower Mississippi River to 50 feet from 45 feet.

The overall project will provide a draft of 50-feet from the Port of Baton Rouge to the Gulf of Mexico over 256 miles of the Mississippi River. Phase 1 of the project will provide a 50-foot channel from the Gulf of Mexico through Southwest Pass to Belmont Crossing and open up approximately 175 miles of the ship channel to the deeper draft, encompassing the entire jurisdiction of Port NOLA.

“This is a great day for the people of Louisiana who depend on the Mississippi River for their livelihood,” said Gov. John Bel Edwards. “When completed, this project will allow larger vessels that can currently use the widened Panama Canal to reach Louisiana ports as far north as Baton Rouge. It will also allow for some vessels to carry heavier loads. Nationwide, industries that depend on this Mississippi River to move goods will benefit greatly from this dredging project.”

“This monumental agreement would not have been possible without the leadership of Gov. Edwards, the Louisiana Legislature and the entire Louisiana Congressional delegation, who have been steadfast in their support of this critical project. In addition, the importance of the work of the Big River Coalition, comprised of ports, government agencies and trade associations along the entirety of the River cannot be overstated,” said Brandy D. Christian, President and CEO of the Port of New Orleans. “One-in-five jobs in Louisiana is tied to our ports and this project will help to make our world-renowned port system even more competitive, while creating opportunities for manufacturers, shippers, growers and producers who rely on the Mississippi River.”

Funding for the approximately $250 million project has been allocated through a variety of sources. As the non-federal sponsor, LADOTD has committed $81 million.

“The Mississippi River has always been a critical economic engine for the United States and connects our Nation’s heartland to the global economy,” said Major General Diana Holland, U.S. Army Corps of Engineers – Mississippi Valley Division Commander. “More capacity means greater efficiency in transportation and less costs for our Nation’s producers. From a benefit cost perspective, that equates to a benefit $7.20 for every dollar spent on operation and maintenance, a significant return on investment.”

Sean Duffy, Executive Director of the Big River Coalition, added, “The deepening of the ship channel to 50 feet is a historic project that will bring the nation’s most prolific artery of trade into the modern post Panamax era. The deepening will offer significant cost savings to shippers and promote economy of scale efficiencies that will help stimulate trade for decades. The Coalition applauds the USACE and LADOTD for their professional support and recognizes the unwavering commitment from the navigation industry across the Mississippi River Basin.”

“With the signing today, we have taken one step forward toward providing a better future for countless Louisianans,” said DOTD Secretary Shawn Wilson, Ph.D. “If we work together with our natural resources and put a multimodal commerce plan in place, the Mississippi River can be an economic super highway and Louisiana can be a leader in global goods movement.”

“No single agency can undertake a project of this level, magnitude, and importance without great partners,” said Col. Stephen Murphy, U.S. Army Corps of Engineers – New Orleans District Commander. “The Corps is privileged to have such a partner in the Louisiana Department of Transportation.Together we look forward on delivering a project that will have immense benefits, not only for Louisiana, but across the nation.”

“This is an important step forward for the shipping industry and commerce in our country,” said DOTD Commissioner of Multimodal Commerce Renee Lapeyrolerie. “State, local and federal officials along with other interested parties worked for a common goal that will culminate in benefits across the nation.”

The American Club: SHIP ANCHORING AND MOORING CONSIDERATIONS IN US RIVERS DURING HIGH WATER CONDITIONS

The American Club: A Shipowner’s Guide to Regulatory Compliance

COVID-19: Spotlight on the Mental Health of Mariners

The COVID-19 pandemic continues to have significant impacts on the U.S. Marine Transportation System, the Global shipping industry and on mariners themselves. The risk of severe illness and death from COVID19 infection and the prolonged nature of the pandemic have compounded existing stressors and created new stressors on maritime personnel, including feelings of isolation, and physical and mental fatigue caused by pandemic-related restrictions on crew changes, shore leave, and repatriation of seafarers. These issues have led to humanitarian concerns as well as concerns for the physical and mental health of mariners.

Mariner mental health concerns are of significant importance to the USCG as they may adversely affect vessel operations and life at sea. Mariner mental health concerns, including those stemming from the COVID-19 pandemic, may include, but are not limited to, depression, anxiety, post-traumatic stress disorder, and suicide. While some of these concerns arise in individuals with diagnosed mental illness, many occur in people who do not have a known mental health condition. The USCG is committed to working closely with industry partners and the National Merchant Mariner Medical Advisory Committee to identify successful strategies to promote mariner mental health. However, the USCG and its partners recognize that strategies will only be successful if mariners feel safe accessing and utilizing available mental health resources.

If you are a mariner who is in need of mental health care, please:
1) do so without fear of reprisal or punishment from the USCG; and
2) remember that it is generally better to seek help and treatment rather than putting yourself and fellow crew members at risk because of an untreated condition.

Developing successful strategies to promote mariner mental health also require that the USCG and the maritime industry understand what mariners are experiencing. To reach this goal, researchers at the University of Washington School of Public Health are conducting a confidential survey of mariners to ask how the COVID-19 pandemic has affected their mental health. Mariners may complete the survey anonymously and study researchers will not share the personal information or individual responses of study participants with the USCG. The USCG wants to encourage all mariners to participate in this very important “Mariner Mental Health Needs during Covid-19” survey. Additional information on the survey can be found here: https://mariners.coastguard.blog/2021/01/29/cmts-covid-19-working-group-survey-of-u-s-marinermental-health-needs-during-covid-19/.
R. V. Timme, RDML, U.S. Coast Guard, Assistant Commandant for Prevention Policy send